October 25, 2021 (Santa Ana, CA) –  The Viet Film Fest 2021 Awards Ceremony will take place virtually for the first time ever on Thursday, October 28th at 6 p.m. PST. and will be available to watch on www.VietFilmFest.com and YouTube. 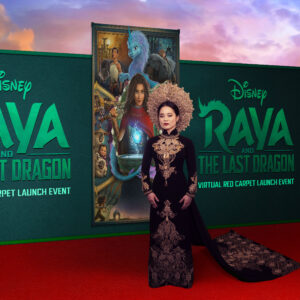 Viet Film Fest is proud to present the Inspiration Award to actress and producer Kelly Marie Tran. As a child of Vietnamese refugees, Tran overcame many obstacles to achieve outstanding recognition and opportunity in the film industry. She made headlines for her role as Rose Tico in Star Wars: Episode VIII – The Last Jedi (2017) and Star Wars: Episode IX – The Rise of Skywalker (2019), as the first Asian American woman in a lead role for the film franchise. Tran also voiced Raya, Walt Disney Animation Studios’ first Southeast Asian heroine in Raya and the Last Dragon (2021). Her documentary Lily Topples the World (2021) received Best Documentary Award at the South by Southwest (SXSW) 2021 Film Festival. Prior to Kelly Marie Tran, the only other recipient of Viet Film Fest’s Inspiration Award was Tran Anh Hung, director of Mùi Đu Đủ Xanh (The Scent of Green Papaya) (1994) in 2013.

Nominees for the Best Actress Award 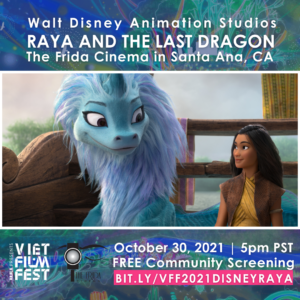 Nominees for the Best Actor Award

Viet Film Fest will conclude with Walt Disney Animation Studios Raya and the Last Dragon on Saturday, October 30th at 5p.m. PST at The Frida Cinema in Santa Ana, CA. This Free Community Day Screening will be open to all. In the spirit of Halloween, costumes are encouraged. Learn more at www.VietFilmFest.com.

###
ABOUT VIET FILM FEST
Viet Film Fest was created in 2003 by the Vietnamese American Arts & Letters Association (VAALA), becoming its largest program. As the largest international Vietnamese film festival of its kind in the world, Viet Film Fest showcases the best creative work by and about Vietnamese people. Through the universal language of film, Viet Film Fest brings together multiple perspectives to expand the scope and horizons of Vietnamese cinema. Our award-winning films have been screened in numerous cities and countries. For over a decade, the festival has attracted thousands of national and international attention for its stunning showcase of shorts and features submitted from all over the world. As the hub of the Vietnamese movie industry, the festival hosts networking opportunities with prominent directors, media experts, and producers, including Tran Anh Hung (The Scent of Green Papaya), Tony Bui (Three Seasons), Ham Tran (Journey from the Fall), Victor Vu (Yellow Flowers on the Green Grass), Le Van Kiet (Furie), and Charlie Nguyen (The Rebel).

ABOUT VIETNAMESE AMERICAN ARTS AND LETTERS ASSOCIATION
Founded in 1991, the Vietnamese American Arts & Letters Association (VAALA) is a community-based, 501(c)(3) non-profit organization that seeks to connect and enrich communities through Vietnamese arts and culture. Learn more at vaala.org or join @vaalacommunity on Facebook, Instagram, Twitter, and YouTube.

Please join VFF in this panel on how to navigate the nuances of COVID-19 in the film industry. ... See MoreSee Less
View on Facebook
· Share