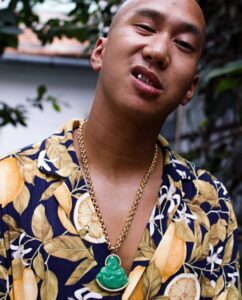 Photo courtesy of The Dot magazine

Music is a theme shared among several feature films in the virtual return of Viet Fim Fest 2021. Whether classic or modern in style, these musicians create songs and sound unique to the Vietnamese experience. Viet Film Fest’s Humanities Out There (H.O.T) Public Fellow June Ke spoke with Nodey, subject of The Nodey Process for an insider look at the DJ’s creative process. This interview has been edited and condensed.

What was it like to be a musician in Vietnam during the 2020-2021 coronavirus pandemic?
When the Vietnamese government had control of the pandemic, things were good and all venues were open. Since Vietnam closed its borders a lot of creative industries, such as the advertising industry, that normally contracted westerners had to turn inward for hiring. Normally the electronic music scene and techno clubs here book American or European DJs as headliners, but with border restrictions, Vietnamese DJs were spotlighted and enjoyed by audiences. In a way, the pandemic creates a kind of involuntary protectionism that helps the local scene in terms of empowerment and emancipation. Though the past couple of months have been really bad — everything is shut down and everyone stays home.

The documentary contains scenes from your performance art-inspired music videos as well as some of your musings about how different political contexts shape the kind of art that is produced. What, in your opinion, is the role of avant-garde art and music in society today?
I guess art can give cues and feelings to people. Art can directly hit the brain of people through feelings without going through political or boring and complicated speeches. 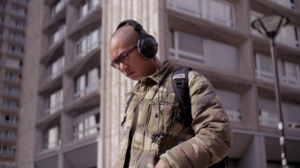 What are some of your favorite musicians today?
For the past few years, I’ve been listening to Rosalia and Johan Papaconstantino a lot! I love how this new generation of singers and musicians mix traditional music and aestheticism from their background with today’s global pop trends. So Rosalia brings in Flamenco elements while Johan Papaconstantino is a French singer who plays Bouzouki, a traditional Greek instrument, and uses autotune and Reggaeton beats. I think it would be awesome to see a Vietnamese artist mix Cải lương (Vietnamese modern folk opera) and Gangsta Rap — imagine what a superstar they would be! I try to do this through short funny songs and videos with my Sinh to Serie on Instagram. 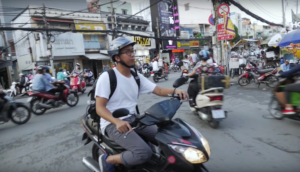 What do you hope for the audience to take away from the film?
The Nodey Process is my testimony as a young Việt Kiều (a term for oversees Vietnamese) from France who tried to follow my own path. My friends and I really put our honest intentions into creating it! I hope that the film provides motivation for others to pursue their own path, follow their fate, and find their own peace. ✌️

Watch The Nodey Process in the To be Vietnamese in Western Europe setlist, curated for the Vietnamese-European experience, at Viet Film Fest on Friday, October 22, 2021, at 11 AM PST. Tickets at https://vietfilmfest2021.eventive.org/welcome.

ABOUT THE NODEY PROCESS
The Nodey Process is a music documentary that captures how French-Vietnamese hip-hop and electro producer Đôn Pham “Nodey” Nguyễn Ngọc leverages on his cultural roots and new artistic aspirations to reinvent his creative journey.  Follow https://linktr.ee/thenodeyprocess for the latest updates.

ABOUT ĐÔN PHẨM “NODEY” NGUYỄN NGỌC
The son of Vietnamese immigrants, Nodey’s singular approach to production has marked him out as one of France’s most in-demand beatsmiths. Fusing the Vietnamese records he grew up on with contemporary US rap, and a touch of the kind of club-ready house and techno it’s impossible to avoid in Paris, his work to date is invigorating, innovative, and hugely individualistic. Nodey’s debut album 🙂 is available on all major music streaming platforms.