The 12th edition and first-ever virtual edition of Viet Film Fest 2021 continues with documentaries that portray contemporary issues and experiences relevant to the Vietnamese, and larger Southeast Asian community. For a more intimate understanding of deportations and family separation, Viet Film Fest’s Humanities Out There (H.O.T) Public Fellow June Ke spoke with Lan Nguyen, Director of Fighting for Family. This interview has been edited and condensed. 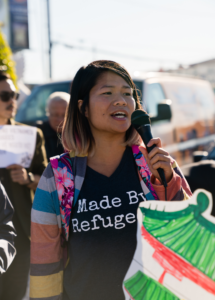 How did you meet Chuh and Rex, and how did they become the protagonists of your documentary?
I met Chuh and Rex through Anh (Vietnamese honorific term for “older brother”) Tin, a lawyer and community organizer at SEAC Village, an organization that cultivates grassroots power through community engagement, social justice, and youth organizing. As a community organizer in the movement to stop deportations, I connected with Tin to explain my film project about the impact incarceration and deportation have on Southeast Asians. Tin introduced me to Chuh and Rex so that I could have the chance to explain the project to them. Although initially nervous, Chuh and Rex eventually felt empowered to share their story in hopes of impacting hearts, minds, and policies to help families in similar situations to theirs.

The documentary centers on the Montagnards, an ethnic minority from the central highlands of Vietnam, who had been heavily recruited by the U.S. Special Forces during the Vietnam War. What do you think is important to understand about the Montagnards’ experience in the United States?
I am not Montagnard myself and thus would like to direct audiences to learn more about the Montagnard community through Montagnard-led organizations such as Voices of the Highlands and Montagnard American Organization. I would like audiences to think about how Montagnard experiences differ from the experiences of ethnic Kinh folks. As a Montagnard person deported to Vietnam, Chuh has not only been hurt by systems of U.S. imperialism, incarceration, and deportation but he’s also had to navigate the settler colonial structures of Vietnam as an indigenous person. 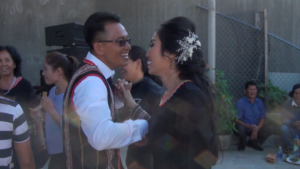 For Chuh and Rex, talking about their seven-year separation on camera is sometimes very emotionally charged. How do you as a filmmaker respond in those moments, and how do you decide what to keep and what to cut?
As a filmmaker, I try my best to emphasize consent and agency in the process of making the film. I offered breaks and gave the family options to not answer any questions. I shared drafts of the film with the family and incorporated their feedback into the editing process, to ensure that the film was co-created as much as possible. I believe that only showing a person’s suffering is dehumanizing and inaccurate, so I tried to show resilience, love, and joy as much as I could in the editing process. We see this through Chuh and Rex’s wedding, video diaries of the family’s time together, video calls, and written letters. 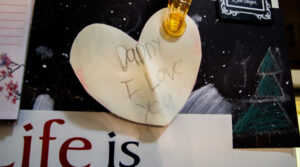 What do you hope for the audience to take away from the film?
I hope audiences will reflect on the various systems that led to Chuh’s deportation and his family separation: war, imperialism, colonialism, poverty, incarceration, and immigration policy. I would encourage audiences to question these systems and critique their existence in our world and feel compelled to mobilize and organize in ways that dismantle these harmful structures that tear apart families like Chuh and Rex’s. Moreover, I hope audiences will be inspired by the family’s love story and learn to incorporate that fierce love into their lives.

Watch Fighting for Family as part of Into the Light, a Free Community Day setlist curated for youth, at Viet Film Fest from October 15-30, 2021. Suggested $10 donation. Tickets at https://vietfilmfest2021.eventive.org/welcome.

ABOUT FIGHTING FOR FAMILY
Almost two decades ago, Chuh and Rex, refugees from the indigenous tribes of Vietnam, fell in love and started a family in North Carolina. In 2017, the unthinkable happened. Chuh was deported to Vietnam, leaving Rex and their four daughters behind in the U.S. Chuh works on adjusting to life in Vietnam, while Rex resiliently balances working, raising her children, and maintaining her long-distance relationship. Fighting for Family shares the family’s love story and fight to mobilize for Chuh’s return to the U.S.

ABOUT LAN NGUYEN
Lan Nguyen is the daughter of Vietnamese refugees and was raised in Long Beach, California. She is a filmmaker, community organizer, and educator. She is active in community organizing in progressive Vietnamese American spaces and issues surrounding incarceration and deportation. Lan utilizes documentary filmmaking as a tool for community organizing and social change. She has directed several short films about social justice issues, which have been screened in festivals, community centers, and universities. Lan’s work has earned her recognition as a 2019 NeXt Doc Fellow and Critical Refugee Studies Collective grantee, and her film Fighting For Family received the Loni Ding Award for Social Justice Documentary in 2020. Additionally, Lan teaches ethnic studies to high school and college students at California State University, Long Beach.